Home - Events - The Mound Builders of the Eastern United States

The Mound Builders of the Eastern United States 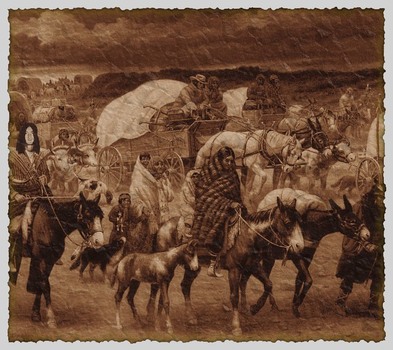 The Mound Builders of the Eastern United States
with Eugene Boesch

Native American cultures in the Midwestern United States developed elaborate ritual and settlement systems increasingly center on the construction of earthen burial mounds. Over almost two millennia this ritual activity gradually became more complex incorporating not only sacred or religious meaning but economic aspects including the rise of craft specials and extensive region-wide trading networks. What began during the Late Archaic period (3,000 years ago) as small mound sites associated with small hamlets and low populations climaxed with Mississippian culture a thousand years ago into large urban centers with hundreds of mounds multiple stories high that had diverse functions and served scores of thousands of people. Soon after the climax, the entire Mississippian system including mound construction collapse leaving large parts of formerly heavily populated areas almost entirely devoid of people.

Eugene Boesch has undertaken archaeological investigations in the Hudson Valley area for over 30 years. He received a Ph.D. and other graduate degrees from New York University. Dr. Boesch’s work has primarily focused on Pre-Contact period cultures and adaptations in the Eastern Woodlands of North America and on early Euro-American settlement in the Hudson Valley region. He also has worked in Israel, California, and throughout the mid-western United States.

Important: all morning Senior Strength classes and Fit 4 Life will move from the Gymnasium to KidSpace for the weeks of 8-2 and 8-9. All morning Zumba classes will move from the Gymnasium to the Main Studio for the weeks of 8-2 and 8-9. Space will be limited and spots will be first-come, first-served. Thank you for understanding. Also, please note that the pool will be closed beginning 8-27 and remained closed until 9-12 for its annual mandated maintenance.