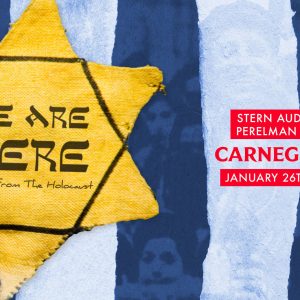 Carnegie Hall Group Trip: We are Here: Songs from the Holocaust

"We Are Here: Songs From The Holocaust" is a concert featuring songs written in the ghettos and concentration camps of Nazi-occupied Europe and the former Soviet Union. In the years after the Holocaust, Jewish artists collected and published fourteen songbooks of wartime music. From heart-wrenching folk ballads to up-tempo satire, these songs present a powerful […]