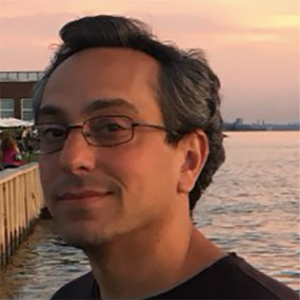 Rabbi Ben Newman is the Director of Spiritual Life at the Shames JCC, he is also on staff at Temple Beth Shalom in Hastings, as well as the founder and spiritual leader of Shtiebel, a new paradigm Jewish community in the Rivertowns of Westchester, NY. He served for 7 years as the rabbi of Congregation Har Shalom in Fort Collins, CO, along with his wife Rabbi Shoshana Leis. Rabbi Ben received a B.A. from Skidmore College in Religion and Culture, an M.A. in Jewish Studies from the Reconstructionist Rabbinical College, and rabbinical ordination from the Academy for Jewish Religion in New York.

He previously served as the Associate Rabbi for JRF Congregation M’vakshe Derekh in Scarsdale, New York. Rabbi Ben is the author of a series of childrens’ books called The Enchanted Sukkah about a time travelling sukkah. In addition to being a writer and a rabbi, Ben is a singer-songwriter who delights in chanting, playing guitar, and using an Indian instrument called a sruti box. He also enjoys reading Jewish literature of all types, as well as science fiction (his favorite author is Philip K Dick), philosophy and beat poetry. Rabbi Ben lives by the shores of the Hudson River in Dobbs Ferry, NY and his greatest joy is being father to his two children.

Important: all morning Senior Strength classes and Fit 4 Life will move from the Gymnasium to KidSpace for the weeks of 8-2 and 8-9. All morning Zumba classes will move from the Gymnasium to the Main Studio for the weeks of 8-2 and 8-9. Space will be limited and spots will be first-come, first-served. Thank you for understanding. Also, please note that the pool will be closed beginning 8-27 and remained closed until 9-12 for its annual mandated maintenance.